Yes, this is our December 2018 update, and yes, it’s super-duper late. As you know, I’ve been looking for a better job (thank God, literally, I am still employed). Job searches, networking, and various other et ceteras take up a lot of my time.

Beyond that, I’ve had other delays. My computer crashed — hard — and I had to take it into a shop to get repaired. That was in mid-December, near the middle of the ironically named holiday “rush”, and it was about nine days before I got it back.

Also, my water heater has developed a leak. I’ve had to do some minor repairs around the area, and I have to arrange for a plumber. Thank God, again literally, it’s still under warranty.

All this has also delayed my newest Christmas diorama photo. Since 2008, I’ve prefaced each December update with a new Christmas Panel. I do have most of the components for what would’ve been the Dec. 2018 panel sitting out; I just haven’t had time to actually set up the scene.

Not all the delays were bad, however. I spent Christmas Eve day and Christmas Day with relatives near Fort Myers. Their original plan was to arrange a rental car for me (to save wear on my old truck); but a couple of days after the initial call, my niece called me with an even better idea: she and her family were then at Disney World, leaving Christmas Eve morning. She said they would swing by and pick me up! And, my nephew and his fiance would bring me back on Christmas Day night! So, I not only got to spend two days with family, I was chauffeured both ways! Holiday wonderment!!

So, without any further further delay, please get to the photos!

Aah, Christmas in Florida: Twinkly lights, and the doors open to let the fresh, cool air in!

Okay, the doors were open because a guy was working on the A/C. But still, Christmas in Florida!

Aauuugh! It’s a Martian war machine from War of the Worlds!

Our December meeting might be considered “O Canada 2.0(!)”, as we were visited by Canadian couple Glen and Robin. Both amparamedics, and both ambought these five ambulances (you see it now, right?) from Original Ken.

And since the toy is about 40 years old, we can safely presume that the Rol doesn’t amatics any more.

…This … um…. Well, it appears to be a repainted Rapid Transit.

We think it’s repainted; we’re not really sure.

And now to our Find of the Month(*). I’m not even going to joke about this, because of the nature of the item. It’s a Matchbox VW van, done up in custom patriotic livery in honor of the emergency crews who responded to the 9/11 attacks. 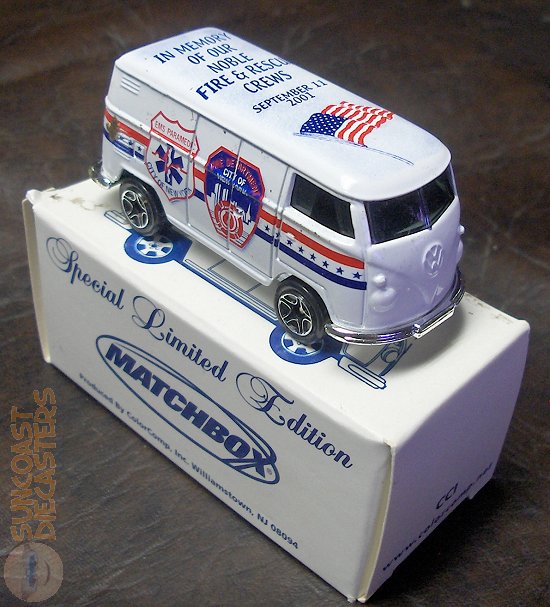 See you at our February meeting!

(Okay, Ken, you can send me the photos from the January meeting now!)

One thought on “Merry Very Late Christmas! (with Explanation!)”