It’s Summer, which means the kids are out of school, and parents have the opportunity/obligation to keep them entertained and busy. Family vacations, summer camp, the great abundance of sci-fi, superhero and CGI cartoon movies out this season, etc., etc.

All of which cost money. Meaning there’s sometimes little or no money left for other activities. Case in point: our June 2017 meeting. Neither one car nor one coin traded hands.

But, that does not mean the meeting wasn’t fun. In fact, this was one of our best meetings for friends just being friends, gabbing and reminiscing. For example, I spent quite a bit of time talking with both Robs Elder and Younger about such topics as Major Matt Mason and ZaAt.

And yes, we do have some photographs for you. Please enjoy:

Doug once again gets down on the farm by bringing in two more hay haulers. The left’n is an Ertl model, while the right’n is another 3-D printed production. The “bales” are static grass glued to wood chips.

This is the undercarriage of the 3-D model. As I was setting up the photo, Doug mentioned that I had set it upside down. I did that intentionally, because I want you to see the impressively complex steering linkage.

Doug also brought in these true 1/64th-scale concrete masonry units. They’re also 3-D printed. Doug intends — as I understand it — to cover the lower portion of a building model with these. I don’t recall the exact number, but I think the word thousand was in his description somewhere. 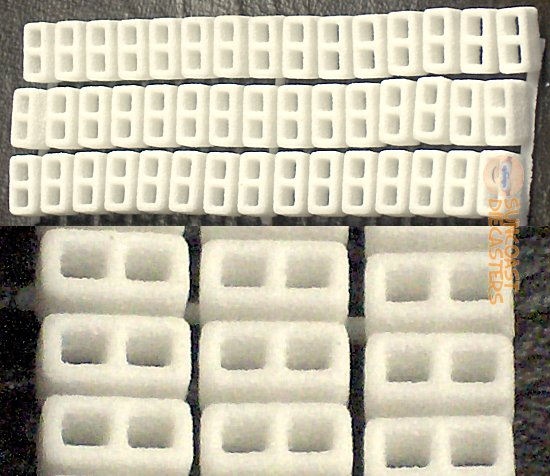 As no buyin’, sellin’ nor tradin’ occurred, I decided to photograph a few choice items from Big Tractor Mike’s table. This is the Indy Eagle. It was produced only in 1969, for the Grand Prix series. Further, it is based on a real racing vehicle.

This is Power Pad, also designed by Ira Gilford, and produced only in 1970. There isn’t much information available about this model. It seems to be a stylized Jeep or dune buggy, topped by an equally stylized camper shell. It also features an exposed transverse engine.(Interestingly, the transverse engine was introduced way back in 1899!)

A change of pace here. Suncoast Diecasters‘ tables feature not just toy vehicles but playsets and media-related items as well. This is the toy set released by Corgi for the TV series Buck Rogers in the 25th Century. I have to compliment Corgi here. The shuttle-like craft that Rogers piloted was named Ranger 3. Corgi could’ve just renamed their existing shuttle miniature as that, but instead used a proper shuttle name. It perhaps disconnects the set from the show a bit, but they earn a point for honesty.

Another vintage price tag. I have no idea what CW / CP means; can’t think of any stores with those initials. It could simply be a clearance tag, as clearance tags are often yellow. If you have any info on this, please post it in the Comments.

Big Tractor Mike set this Matchbox behemoth in front of me, clearly wanting a photograph of it. It’s a King Size-series model, the DAF Car Transporter, model no. K-11. This model was produced from 1969 through 1975. What I particularly like about this model is the inclusion of “working” hydraulic lifts on the deck.

Here we have the curiously mis-named Shelby Turbine. Another design by Ira Gilford, again for the Grand Prix series as was the Indy Eagle. This model fared a little better, in that it was produced from 1969 through 1971. The flowing body lines, accented by the camera angle, impart a nice fluid feel to the image. This is my favorite photo in this set.

See you at our July meeting! (…Which is tomorrow!)

Did my best to get our July update posted before running out of July. So, skipping the wacky intro again so you can get right to the photos.

Last month, we presented to you a garbage truck purchased by Emergency Back-up Ken’s wingman, Gary. Here, EBU Ken proves to be his own wingman with this Matchbox A-10 Thunderbolt II.

”Welcome ta Oith.” (Just process that one a little while.)

I RAOK’d Original Ken with this Racing Champs ’41 Willys with neat-o opening hood.

Ed bought from Big Tractor Mike this very rare Milton military ambulance. As BTMike and O’Ken explain, Milton is a company in India, which often used Corgi and other UK dies. You can read more about Milton at the Bickford Diecast Research Center, doing a word-search for Milton.

They refused to produce any manual transmission models.

In the top image,you can see the steering wheel clearly. In the bottom image, you can see the smooshed, white globby-looking thing with big black splotches which is presumably the driver.

It’s an ambulance, so maybe that’s the driver’s ghost?

This is a 1914 Stutz Bearcat. I know this, because I know such things. More specifically, it’s a Matchbox Models of Yesteryear-series 1/48-scale 1914 Stutz Bearcat. What I can’t explain is that bizarre device ominously installed over the ‘Cat, looking like something Auric Goldfinger might use for nefarious schemes.

Oh, it’s a fuel reservoir. For butane. Because it’s a lighter. Ed found this somewhere, and brought it in to show it off (violating one of the few rules we have). Encased in a Lucite block, this model will stay fresh long past its “use by” date.

I’m kidding! Hopefully you noticed either the triangular peg hole and/or the Leo logo. This is Bill’s, a Leo (India) variation, variations being one of Bill’s specialities. As I’ve said before, there isn’t much info available about Leo online, but this page at Gary’s Cars makes for a interesting if brief read.

O’Ken bought this rare Red Baron from Bill. Now, obviously Redline-era models are rare to begin with; what makes this version even more rare is the slightly taller and pointier spike on the helmet. This was replaced with a blunter spike beginning in 1974.

Yeah, some bites in the paint, but still gorgeous.

Big Tractor Mike bought several things from me, starting with that most important of collector accessories, storage.**

Supposedly, imitation is the sincerest form of flattery. Which I guess explains Mattel’s various attempts at imitating Galoob’s success in the “micro car” market. BTM collects “micro” models, and was happy to buy this from me. This particular set contains bite-size versions of three of my favorite Hot Wheels models: Oscar Mayer Wienermobile, Sharkruiser and Rigor Motor.

Yes, they link together to form a train or roller-coaster. Yes, it’s weird.

And finally, BTM got this ALF hand puppet. BTM has purchased several ALF items from me over the years, so when I (finally) found this guy in storage, I had no doubt he would end up Safely at Home™ with Mike. These puppets were available at Burger King. There were four variations: this hair-band rocker, a Hawaiian shirt-wearing version, and two others I don’t remember.

Well, anyway, one of the models they bought is a ’57 Chevy from the 2002 Hot Wheels Racing series (which I should’ve taken more photos of), and this Johnny Lightning ’65 Chevy Chevelle wagon, which I did take another photo of. It’s a very nice casting, with deep lines around the doors, windows and even the fuel filler door. This model is done up in an “unfinished project” motif, which can really add realism to a diorama.

A ”555” phone number? Something tells me this is a bait car.

This is how one designs coolness.

This was only issued in 1971, making this one of the more exceedingly rare Hot Wheels models. And, had Gilford designed the trailer in a more “traditional” style, that rarity alone would have made this model very cool. But “traditional” does not define a successful Hot Wheels artist. Elements such as the cleft forward side window and “frameless” rear window give the trailer that distinctive Hot Wheels “look and feel”.

…Why am I getting ”Jurassic Park 2” flashbacks?

I have stated previously that when it comes choosing a model to designate as Find of the Month for any given meeting, broadly speaking either one simply jumps out, or there are several contenders. For our July meeting, it was a bit of a combo. Ed’s Milton ambulance, Bill’s exotic GMC Motorhome and Ken’s sharp(-looking) Red Baron were all candidates for FotM. However, from that pack of notable worthies, the Team Trailer very clearly stands out. For all the right reasons, I very happily declare the Ira Gilford-designed Heavyweights Team Trailer to be Suncoast Diecasters‘ Find of the Month(*) for July 2016.

Let’s start a campaign to have the Team Trailer re-issued in ”Hot Wheels blue” livery.

See you at the August meeting!

**An erroneous comment regarding the car cases has been deleted.  ~WM