No kidding there. My old laptop was a WinXP model. Support for that OS ended in 2014, and support for the various programs I was running on the laptop naturally dwindled over time. I have finally bought a new Win10 model, and I’ve spent the better part of the last two weeks by turns either beating Windows into submission or flailing about helplessly at its ingrained obstinance.

So, get to the photos!

Greetings, Citizen! I am looking forward to your assistance in enjoying this March 2017 update. Let’s begin this rousing adventure!

Doug bought this 1969 Dodge Charger Daytona Hemi from Big Tractor Mike, as a gift for a very special person.

(These are all ERTL models, by the way.)

…As well as this similar implement.

Which folds out to sleep four comfortably.

Of course, farm implements to be useful must be attached to a strong, sturdy tractor. Doug has chosen this handsome Allis-Chalmers model. 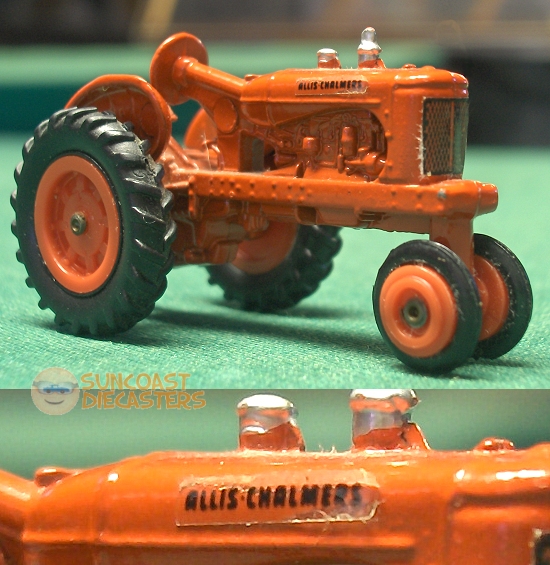 BTM added yet again to my collection of DeLoreans with these two offers. First is this sweet Hot Wheels Entertainment-series hover-mode model. I appreciate this one because it’s not only a great variation on the DeLorean theme; it also gives me a MOC model to pair with the one I loosed in September of ’15.

The other one is this cartoonishly-proportioned Happy Meal prize. And I mean cartoonish in the literal sense, as it’s based on the 1991 BttF cartoon. Which you forgot all about, didn’t you? (Can’t blame ya.)

Actually, that “big block” isn’t merely decorative. It houses a friction motor, the flywheel of which has a layer of flint. Which is also why it’s transparent; give the toy a strong-enough push, and the motor will generate sparks to simulate the “time travel” effect:

1.21 Gigawatts! from Suncoast Diecasters on Vimeo.

By the way, this video is raw, unedited and lacking the quirky title and credits typical of our other videos because in designing Windows 10, Microsoft did away with Movie Maker. Just another in MS’s long history of thoughtful and considerate decisions[citation needed]. I still have my old WinXP laptop, so I do still have access to Movie Maker there; it just means shuttling videos to & from on portable storage. If you happen to know a good, safe, simple (and preferably free) video editor & converter for Windows 10, please let me know in the Comments.

And in case you’re wondering what that white object protruding out of the side is (mis-identified by Big Rob as “a wad of gum”), it’s good ol’ Doc Brown himself. Which just proves the adage:

“Some things were not meant to be seen in close-up.”

Speaking of Big Rob: He too also bought some stuff from BTM. Starting with these two Cheetah models by Johnny Lightning. Apparently JL learned well from Mattel that the same model can be re-packaged as a different series to sell it again with otherwise little effort (e.g., my many HW DeLoreans). The red one is “Rebel Rods”, while the green one is “Street Freaks” (cross-referenced with “The Spoilers”). 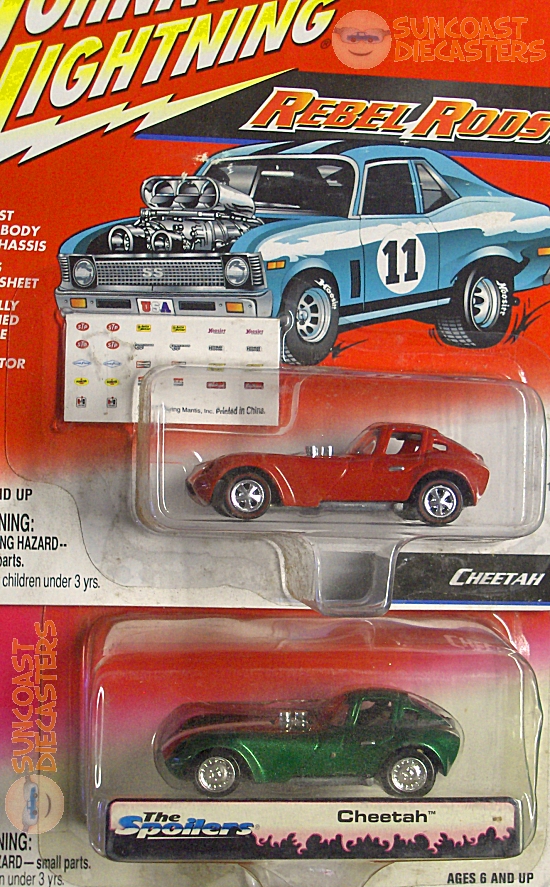 Toy car collecting: Made for the spreadsheet era.

And finally, Big Rob made the Big Buy from Big Tractor Mike with this Big Scale Batmobile. And I do mean big, as in 1/24th-scale big. It’s by Metals Die Cast, an offshoot of Jada. Sweetly detailed, and elegantly packaged with yon Caped Crusader standing alongside his crime-fighting chariot.

Nicely finished, literally and figuratively, with “trident” exhaust pipes, “batwing” fender flares, and drag ‘chutes on either side of the exhaust nozzle.

Even the Boy Wonder is included. He’s in the passenger seat, using the Batphone. He’s probably crank-calling the H.I.V.E. Tower again.

Well, there’s no need to recite its thoroughly obvious qualifications. With zero hesitation I happily and readily declare this sweet, super-size Batmobile miniature as Suncoast Diecasters‘ Find of the Month(*) for March 2017. Congratulations, Big Rob! 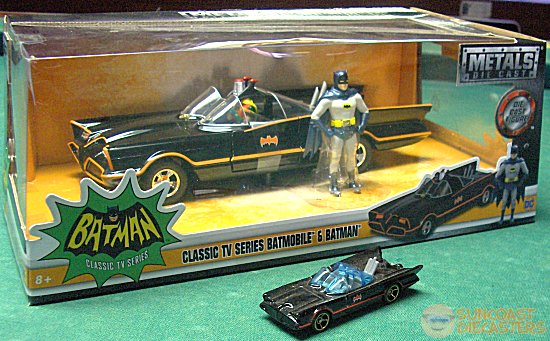 The small dark rectangular thing is something BTM threw into the deal. Not sure what it is. Candy bar, maybe.

See you at our April meeting!